How to make a tarte flambée (Flammkueche recipe) 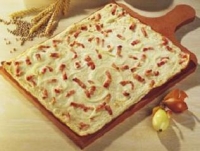 Tarte flambée is a very simple and delicious Alsatian specialty, widely consumed in its region of origin. Its origin dates back to the time when each house baked its own bread. We then used the rest of the bread dough, spread it out and put cottage cheese, bacon and onions on it. The tradition has remained and remains a very popular dish in Alsatian restaurants.
The tarte flambée is eaten with the fingers and shared for more conviviality. It is prepared basically with bread dough, cottage cheese, bacon and onions, but there are variations such as au gratin, forest or munster tarte flambée. For added convenience (but less flavor), you can buy pre-made pie shells if you don't want to make the bread dough yourself.

I. The classic tarte flambée (the traditional Flammkueche)

Ingredients for 3 tartes flambées (about 1 tarte per person):

1. Butter and flour the baking sheet that will accommodate the pie.

2. Put a third of the bread dough made, roll it out so that it is very thin (1-2mm) or place your tart shell.

4. Mix the cream and the fromage blanc. Incorporate the salt, pepper and nutmeg (the pepper gives the preparation very good taste).

5. Distribute the onions and bacon evenly over the pie.

Tips:
- The ideal is to use a wood-fired oven for a more authentic taste. In Alsace, the pies are put in wood-fired ovens and the flames "lick" the pies for 10-20 seconds. This gives the pie that incomparable flavor.

Add the Paris mushrooms cut into strips on the tarte flambée before placing in the oven.

Before baking, place thin slices of Munster on the pie. The tart will have a very strong smell when it comes out of the oven, but it is surely the most delicious variant on the palate.

In this variant, you can replace the onions with garlic and add herbs to it.

Here are the main tarts flambées recipes that you will find in Alsatian restaurants. The list does not of course stop with these few variations and only your imagination is the limit. You will find, for example, tarts flambées with snails, maroil, etc ...

The tarte flambée can also be used as a dessert, just replace the basic elements with sweet products. Here are some examples :

The best known. Simply replace the onions and bacon with apples and sprinkle with cinnamon. Once your tart is out of the oven, you can sprinkle it (moderately) with Calvados or Grand Marnier and then set it on fire. You will get a beautiful flame which produces a wonderful effect. In addition, the alcohol will be burned and therefore the children will have no problem eating it.

Substitute bananas for the onions and bacon. Once your pie is out of the oven, you can add chocolate coulis to it.