How to calculate the molar mass of a molecule 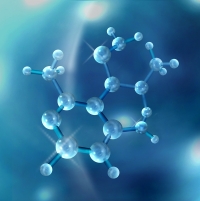 Molar mass is the mass of one mole of a substance (a simple body, a chemical compound). It is expressed in grams per mole (g · mol −1 or g / mol).

This relationship translates into:

For each chemical element, the mass of one mole of atoms is found in the periodic table of the elements. It is in fact the average molar mass for all the isotopes of a given element, according to the proportion of each isotope. The value of the molar mass also corresponds to the average number of nucleons per atom of the element, from which the binding energy of the nucleons inside the nucleus must be subtracted.

Example: one mole of chlorine atoms 35Cl has a mass of 35 g. One mole of 37Cl chlorine atoms has a mass of 37 g, from which must be subtracted the mass corresponding to the binding energy of the nucleons. The element chlorine exists in the natural state with the proportions 75.77% / 24.23% in 35Cl / 37Cl. Its molar mass is therefore worth 35.5 g⋅mol -1 :

from which we must subtract a mass of 0.032 g corresponding to the binding energy to find the mass (35.453) given in the table of the element. The molar mass of a simple body is simply the product of the number of atoms in the molecules of that body times the elementary molar mass. Example: oxygen oxygen O2 has a molar mass of 31.9988 g⋅mol -1 , which is the mass of oxygen multiplied by two.

The molar mass of a molecular compound is calculated by adding the molar masses of all the elements that make up its molecules part by multiplying them by the coefficients of the formula of this compound.

We read in the periodic table of elements:

Water has the formula H2O, which is

Glucose has the formula (C6H12O6), we find from the information below:

Molar mass is numerically the same as the average value of molecular mass which is the mass of a single molecule and is expressed in atomic unit (u).

As with molecular compounds, one must first know the crude formula of the ionic solid. Again, we add all the molar masses for all the elements of the solid, taking into account the proportions of each element, and adding the water molecules in the case of hydrated solids.

More in this category: How a wind turbine works »
back to top