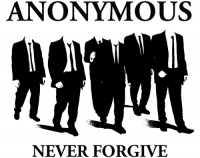 You heard a lot about "Anonymous" hackers but you don't really understand who they are and how they are hacking websites or computer infrastructures ? This is what we'll to explain here.

Anonymous are a group of Internet users close to hackers. Their organization is anarchic and chaotic and most of their actions are illegal. There are no distinguished leader in this organization.

They come together to defend different causes against governments or multinationals. Although close to hackers, many of their members are quite normal people who do not know anything about computers. Many people join this movement by defending common causes.

Anonymous seek to defend freedom of expression and democracy. They are also known for their sense of humor (replacing the home page of the Hannah Montana series site with a picture of a hemorrhoid for example).

How do they do it?

Their attacks most often take the form of "denial of service" (DDoS). This principle consists in overloading a server with requests until it can no longer keep up and the site becomes inaccessible.

To do this, Anonymous uses HOIC (High Orbit Ion Canon). Once this little program is installed and launched, it suffices in a few clicks to choose the site to attack and the power of the attack to launch it and "bring down" a site.

An isolated Internet user will find it difficult to "bring down" an important site, but by consolidating their attacks, the members of Anonymous increase their power.