How to make the male symbol (♂) on the keyboard 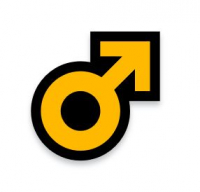 You want to type the "man" symbol / "male" symbol (♂), sign with a circle with an arrow going up to the right and you do not know how to achieve it on your keyboard to integrate it into a document or a word or image processing tool like Word, Open Office or Photoshop?

To make the masculine sign on your keyboard, simply perform the following key combination:

In detail : Keep the Alt key pressed (situated just at the left of the Space bar), then type successively the numbers 1 1 , then you finally release the Alt key, which will bring up the "Man" / "Male" symbol: ♂

This symbol originally represents the God of war Mars and is still widely used today, for example to represent gender or sex on toilet doors in public places with the symbol "female" (♀).

You want to know how to make the feminine symbol (♀), click on the following link: How to make the symbol "woman" (♀) on the keyboard