How does a car engine work 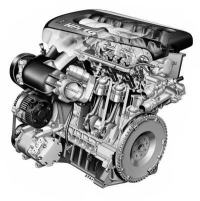 Most automobiles, at the dawn of the twenty-first century, are powered by an internal combustion engine, also commonly called in France

and wrongly, internal combustion engine. This engine transforms chemical energy, provided by the combustion of fuel - a mixture of air and hydrocarbons - into mechanical energy through a connecting rod-crank system. The liquid fuel is brought from the tank to the engine by an electric pump through a pipe and a filter. When the fuel is gaseous, it arrives at the engine through a regulator.

The connecting rod-crank system works on the following principle: a piston on which the pressure of the gases resulting from the ignition of the fuel is exerted drives a connecting rod which, connected to a crankshaft, generates a rotational movement of the latter. A torque is thus generated. The heat engine generally consists of several connecting rod-piston assemblies connected to the same crankshaft. As with any piston engine, there are many possible cylinder configurations.

Two main types of internal combustion engines are distinguished: spark ignition engines and diesel engines. These two categories of engines are distinguished mainly by the type of hydrocarbons used for fuel, the method of gas ignition (fuel) and their performance. The theoretical efficiency of the automobile heat engine varies between 30 and 45%. These relatively low values are explained by the fact that part of the chemical energy is lost in mechanical friction, heat and pumping. The latter is evacuated in the exhaust gases - products of the combustion of fuel - but also by the engine cooling systems (air / water, air / oil exchanger) called radiators. Appeared in 1834 and popularized thanks to the speed record of the Jamais Contente, the electric automobile gained momentum in the late 1980s.

1990s because its environmental impact is, in principle, lower than a “thermal” automobile and its operation is quieter, less polluting and very flexible. One or more electric motors can partially or totally ensure the production of mechanical energy for the automobile.

These engines draw their energy from accumulator batteries. During acceleration phases, the motor transforms electrical energy into work (“engine” phase) while during braking phases, they transform the vehicle's inertia force into electrical energy (“generator” phase) thus allowing to recharge the battery. A bi-directional regulation system manages the exchanges between the motors, generators and the battery. Variants of the electric motor are under development that use a fuel cell system to provide electrical power.

Two types of electric motors are used to propel the automobile: alternating current motors and direct current motors. These motors are composed of a rotor (rotating part) and a stator (fixed part). In a vulgar manner, the electrical energy is transmitted to the rotor windings which, by magnetism with the stator windings, generates the rotation of the rotor (“motor” phase). As electrical machines are reversible, the kinetic energy of the automobile can set the rotor in motion, which by magnetism generates electrical energy (“generator” phase).

As its name suggests, a hybrid engine is a hybridization between a heat engine and an electric motor, in order to combine its advantages. The two types of engines mounted on the vehicle, an on-board computer system combined with power electronics manages their complementarity, as well as the resources available depending on the demands and constraints.

This type of motorization, while being more complex to design and manufacture, is in theory particularly ecological compared to conventional thermal or electric systems. In particular, it allows a much lower carbon monoxide (CO) rejection than that of a heat engine alone. The most obvious advantage is the non-pollution by the exhaust gases of the places where these emissions are the least desirable - the cities for example - the electric motor runs alone up to a certain speed, unless of course that the batteries are discharged. The heat engine then takes over, while recharging the batteries.

The motor, electric or thermal, provides torque on its output shaft. This torque must be transmitted to the wheels in order to allow the movement of the automobile. The various transmission components - the gearbox, axles and differential among others - perform this function.

On certain electric vehicles and certain hybrids, specially designed electric motors are directly integrated into the wheel hubs, which eliminates the need for heavy and power-hungry transmission for the electric part. The gearbox is the organ which makes it possible to modify the speed of movement of a motor vehicle while maintaining the optimum speed of rotation of the engine. In the case of the internal combustion engine, it allows above all to adapt the engine torque available to the needs of the driver. A gearbox is usually coupled to the engine using a clutch, which isolates the transmission from the engine.

A gearbox is an assembly of movable and fixed gears on axles, enclosed in a sealed housing and lubricated by splashing or under pressure. This system makes it possible to modify the gear ratio - relationship between the speed of rotation of the engine and that of the driving wheels - essential between the wheels and the engine, an internal combustion engine not having sufficient torque available at all engine speeds. rotation.

* A manual gearbox is only managed by the driver. The latter disengages the motor in order to disconnect it from the

transmission and changes the gear ratio by operating the gear lever.
* A robotized gearbox works roughly on the same principle, except that the gear change is operated by motors or actuators (hydraulic or electromechanical). The driver can control the maneuver or let an electronic controller take care of it.
* An automatic gearbox offers additional comfort because it does not impose any interruption in the traction to change gears. The management is also entirely entrusted to an electronic controller in the service of hydraulics. The gear ratios are not carried out using a series of gears that may or may not mesh, but using one or more epicyclic gears in cascade. A hydraulic torque converter placed between the engine and the gearbox, multiplies the torque available at low revs, filters jerks and replaces the conventional clutch.
* Finally, a continuously variable transmission (CVT) is of a radically different design. This "box" consists of a belt connecting two pulleys - one motor side and one differential side - whose diameters vary automatically, thus adapting the torque supplied by the motor to demand. It offers an infinity of reports without jerks, nor rupture of the propulsion as well as a constant adaptation between the speed of rotation of the engine and its instantaneous load. While the gearbox makes it possible to adapt the engine torque, the “transmission” makes it possible to transmit the torque present at the box outlet to the wheels. The bridge performs this function. For this, the bridge is connected to the wheels by two shafts or half-transmissions fitted with cardan shafts. In front-wheel drive automobile models, the axle is very often placed in the same housing as the gearbox,

A bridge necessarily incorporates a differential, this member allows a difference in rotational speed between the wheels of the same axle, in curves. Without this device, it is very difficult to take a turn without rolling in a walk. On vehicles intended for off-road use, a locking system for the differential (s) allows traction in conditions of zero adhesion of one or more wheels.

Three methods of transmitting engine torque to the wheels are distinguished: traction, propulsion and all-wheel drive. On a front-wheel drive automobile, engine torque is transmitted only to the front wheels, while on rear-wheel drive, this torque is transmitted to the rear wheels. If the motor is not located at the rear, the movement is transmitted through a transmission shaft. On an all-wheel drive vehicle, the two systems coexist to provide maximum traction, especially off-road. On some implementations, the shaft connecting the front and rear axles is fitted with a differential making it possible to dynamically distribute the torque between these axles.

Content subject to CC-BY-SA license . Source: Article How the automobile works from Wikipedia in French ( authors )

More in this category: « How to change a car wheel How the brakes on a car work »
back to top