What is the maximum speed of a phone in 3G 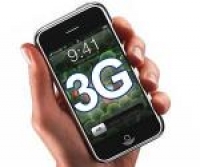 The 3G + standard theoretically delivers 42Mbits / s , but it is rare in practice for users to be able to exceed 7Mbits / s because the speed depends on the distance to the antenna and the number of people connected at the same time on this antenna .

Thus, it will be easier to obtain a 3G broadband in open country near an antenna than in a large city where many people use mobile services. In addition, the speeds also depend on each operator, several comparisons have been established in this regard.

More in this category: How to get the RIO code for your mobile (works only in France) »
back to top